Human Description
In her human form Jay has long hair of a very dark brown colour. She often intersperses them with highlights in green or blue. Something about her seems to just turn heads when she is walking by, whether it is the way she carries herself with absolute confidence, or the fact that she just knows how to accentuate her female curves. Her movements are smooth, and elegant, almost cat like. Even on the highest heels she never seems to lose her balance. Jay is definitely not shy to show what she has got, which is helping to raise tips during her “Cojote Ugly”-like night jobs. Many a customer could also swear that her eyes are absolutely unique – the shape is somewhat exotic and the colour seems to change a lot when one looks closely, but they are always burning with a sometimes intimidating intensity. Jay’s clothes are usually quite revealing, with low-riding jeans, deep-cut cleavages or rather short skirts. Her style could be described as gothic, with her preference of black or dark blues, greens and blood red.

Changeling form:
The most prominent feature of Jay’s Eshu form are definitely her wings: in the form of feathered angel wings, but as dark as her hair with an iridescent quality in the green and blue tones of a peacock. Her eyes are even more accentuated in her fay form, with thin black patterns framing them almost like a masquerade mask. The patterns also cover her arms and legs, but with a sort of gradient, being darkest towards her shoulders and hips and lightest close to her hands and feet. Even among the fay folk she stands out, which is probably why her former owners used her as a stage attraction – not unlike to the work she chose for herself in the human world. Still to entertain an audience as demanding as the fae, her tricks in Arcadia were highly reliant on a combination of Chicanery and Legerdemain.

Already as a teenager Jay felt the urge to leave the constricting environment of her family’s home: a farm in the south-west of California. She is dreaming to become an actress on the big screen or stage and has never stayed in the same spot for more than a few months since she left home at the age of sixteen. 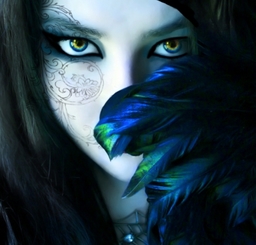